(Reuters) – Google Inc launched in India on Monday a $105 smartphone, the first device from its “Android One” initiative which is aimed at boosting sales in key emerging markets through cheaper prices and better quality software.

The Mountain View-Based company tied up with Indian handset makers Micromax, Karbonn and Spice Mobiles to launch the 6,399 rupees phone, which is powered by Google’s operating system and targets the booming low-cost segment of the world’s fastest growing smartphone market.

BY NIVEDITA BHATTACHARJEE AND TOMMY WILKES

After launching in India, Google said it plans to expand Android One to Indonesia, Philippines and other South Asian countries by the end of 2014 and in more countries in 2015. 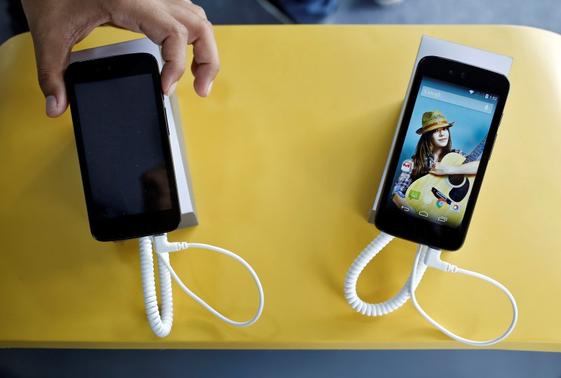 Android One based mobiles are on display during its launch in New Delhi September 15, 2014. Google Inc launched in India on Monday a $105 smartphone, the first device from its ‘Android One’ initiative which is aimed at boosting sales in key emerging markets through cheaper prices and better quality software. CREDIT: REUTERS/ANINDITO MUKHERJEE (INDIA)

The company is working with partners including Acer Inc, HTC Corp and Panasonic Corp to build more devices under Android One, Sundar Pichai, who heads Google’s Android and Chrome units, told reporters at the India launch event in New Delhi.

“When (handset companies) look to make a phone, they will get a menu. They can put together a device in a much quicker fashion, knowing we’ve already tested the software,” he added.

With Android One, Google aims to improve the quality of hardware and software by giving handset makers a frame of reference. Strong sales of Android One smartphones should mean more Internet access, and more usage of Google’s suite of products.

Currently, many cheap smartphones in India and other emerging markets run different and somewhat customized versions of the Android operating system. The many variations they produce make the phones prone to glitches, and leave Google with almost no control over its platform

Pichai said eventual software upgrades on the Android One phones would come directly from Google. This gives the company better control of the operating system and ensures users get a consistent service.

“After China and the United States, India is the third largest smartphone market in the world and Google won’t like to leave such a huge market in control of brands looking to use a custom-forked Android OS as is happening in China,” said Neil Shah, research director for devices and ecosystems at Hong Kong-based technology research agency Counterpoint Research.

India is an attractive market for companies that make low-cost smartphones because more people are now able to afford a smartphone, often for the first time.

Just 10 percent of the India’s population currently owns a smartphone, brokerage Nomura said in a recent research note, and that figure is likely to double over the next four years.

There are at least 80 smartphone brands in India and analysts say the Android One phones must offer customers more than just affordability if Google wants to compete with Samsung Electronics Co Ltd, Motorola and China’s Xiaomi, which all make similarly priced devices.

“The initial pricing never sticks but it’ll be tough for them to compete if they don’t come down further,” said Counterpoint’s Shah.

Google is also working on allowing users to watch YouTube videos offline in a country where access to the internet is often pricey and patchy.

(Reporting by Tommy Wilkes in NEW DELHI and Nivedita Bhattacharjee in MUMBAI; Editing by Miral Fahmy)

close
Start typing to see posts you are looking for.
Scroll To Top